When I was at secondary school I had to write an essay for English about whether Romeo and Juliet were “victims of Fate or their own foolishness”.

For some reason that phrase always comes to mind when I watch Baz Luhrmann’s (The Great Gatsby, Strictly Ballroom) interpretation of Shakespeare’s play. There are, of course, arguments both ways.

For those of you who have managed to, somehow, miss this story of woe here’s a brief summary.

Romeo Montague (Leonardo DiCaprio) is love sick  until his best friends persuade him to attend a masquerade party where he meets Juliet (Clare Danes). Unfortunately, Juliet is a Capulet, the sworn enemies of the Montagues, and the party is celebrating her engagement to Paris (Paul Rudd). Then Tybalt (John Leguizamo), Mercutio (Harold Perrineau) and a friar (Pete Postlethwaite) all get involved and people start dying.

Lurhmann takes this story, places it firmly in the modern day while leaving Shakespeare’s prose untouched. Obviously this alters meanings, but for the most part it leaves the Bard’s work reasonably unscathed. At least more so than some modern “reimagining”s. I’m looking at you Gnomeo and Juliet. 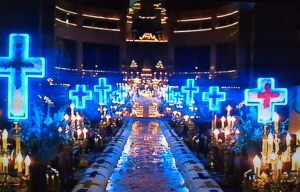 think, is what pushes that essay title to the front of my mind. Luhrmann’s adaptation shines lights on both angles.

If we consider Fate to be synonymous with religious deity, this film is marinated in it. Every possible religious aspect of this feature is highlighted in gaudy neon. There is no doubting the role that Fate plays in the lives of the citizens of this fictitious Verona. Or at least the importance they place on it. As you can see from the photo on the left, it is not subtle.

So it makes sense. These two young fools fall in love, and Fate punishes them for going against the wishes of their family.

Ot does it make sense? They are clearly idealists and Romantics (the capital R again!). They are also teenagers. Baby-faced DiCaprio demonstrates this perfectly during his first scene when he is mourning the loss of the beautiful Rosaline as a love interest. And what happens next? His friends take him to party where he gets drunk (and high) and promptly forgets the supposed love of his life.

Poor Rosaline is replaced by the youthfully innocent face of Juliet who spends much of the film dressed like an angel. Is this more religious imagery (Romeo defiled an angel and now he must pay), foreshadowing of a future not yet written or a demonstration of her naivety? Perhaps all three or a combination of them.

As if this wasn’t proof enough, Romeo then breaks in to the back garden of his beloved and romps around in her swimming pool to avoid being caught by her father (that sentence was meant as an innuendo). These are not the actions of a sophisticated romantic, slighted by circumstance. This is a drunk teenager.

But whatever you think. Whether you think they are the epitome of romance or merely a pair of excitable teens this is still a story that transcends time and place, and this adaptation is testament to that. It was nominated for an Oscar for its art direction, and as always with Luhrmann, the visuals are striking. Watch out for his signature billboard.